Over the years I penned close to 100 articles for Western & Eastern Treasures magazine. I thank them for allowing me to share a few here…..

I first purchased a metal detector because I wanted to find coins, especially old and valuable coins that would enable me to fill in the holes in my collection, and that would not cost me my life savings.  Have I accomplished this?  Absolutely, and I wouldn’t trade that initial investment for anything in the world. I have indeed found hundreds of old coins, many of them now proudly placed in slots in my coin books, and best of all, I’ve found a great pastime that continues to provide me with excitement and fun. What have I learned most from all these many years and experiences?  That to be a serious player in this game you have to understand and play by the rules. Here are seven I consider indispensable….

UNDERSTAND AND APPRECIATE YOUR METAL DETECTOR

Get to know its functions, it’s abilities and it’s drawbacks. The features used to entice you to buy the detector you now have were put there for a reason. Read the manual that came with the detector. and then experiment with each control, adjusting up, down, sideways and backwards. Sometimes one or two small tweaks may make the difference between a good or bad day of detecting, and with today’s computerized features there’s no reason for that to happen, or for you to be bored.

UTILIZE THE ALL-METAL MODE WHEN POSSIBLE

Yes, discrimination is great, and yes, it’s necessary, but learn how your detector reacts in the all-metal mode on any given site, and then decide how to proceed. Note the metered readouts as you do this. If the constant chatter offends, certainly switch to the disc mode. The first search of any site is an investigation, if you will, a chance to get a “feel” for the area. All-metal will let you know immediately what it has to offer. Remember too, that sites used by a great many people over the years will provide you with a great many responses….and not all of them are bad by a long shot!

Most detectorists set discrimination much too high. Any increase in this feature generally decreases depth proportionately.  Yes, bending over and digging pulltabs and bottlecaps is a pain, but leaving a gold coin or ring behind would be downright agonizing. For years I have used the “notch below nickel” acceptance as the standard for all my detectors, and I can tell you that many of my good finds would have been left in the ground if the setting had been any higher.

INCREASE THE SENSITIVITY/GAIN WHEN POSSIBLE

Not all areas will allow this, but whenever possible, go for that extra advantage, that extra inch. I have also found that by changing to a smaller coil I can usually increase sensitivity where I couldn’t do the same with the standard coil. This combination in a trash laden area often makes a great deal of difference, in part because it also necessitates a slower sweep speed.  Likewise if you turn your threshold just below audible (and I mean “just below”) you can usually increase your sensitivity even more without the chatter.

KNOW WHEN TO CHANGE COILS

Never give up on a site until you’ve tried searching with either a larger or smaller coil. Like the features on your detector, searchcoils of various sizes were manufactured for a reason.  An area seemingly void of any metal targets demands a search with a larger coil, while an extremely trashy area calls for a smaller, “sniper” coil. No matter which you opt for, go slowly. The larger coil may be seeing extremely deep targets and offer only whispers easily missed by a hasty hunter. The smaller coil dictates a tighter sweep pattern to ensure adequate overlapping, and such disciplined detecting cannot be done at a racehorse pace.

KNOW WHEN TO SEARCH AND WHEN TO RESEARCH

Weather does indeed make a big difference in your success, as does the region of the country you live in.  For example, the hot dry weather that Texas suffers in the summer, makes detecting almost impossible. The ground is as solid as a rock, and fissures appear in parched areas. You will not only get a blister trying to recover a deep target, but you will often find a brand new penny at 12 inches. The time it takes to find this out is better spent researching in order to be prepared for those ideal days ahead.

YOU WON’T FIND OLD COINS WHERE THEY DON’T EXIST!

Spending two hours in an area void of coins is extremely frustrating.  A little more time reading, asking questions, or surfing the web will pay off down the road. There are many productive sites simply waiting to be detected. What makes them difficult to discover is that they are not labeled. There are no big signs saying “I used to be a picnic grove” or “I’m an old ball field“.  I recently found a few turn of the century coins in an old field at an intersection I drove past every day. It turned out to be a ball field used years ago, abandoned when a newer one was built. Do an adequate job of researching, and you will find your productivity going up each time out.

Everything Old is New Again

This old saying can apply to a lot of situations, but in metal detecting it really rings true. Sometimes we get caught up in too much sophistication, too much technology, and too much hype, forgetting in the process what got us to this point. A thorough understanding of what you are looking for, combined with a thorough understanding of the basics of effective detecting, still works for me. Add in a pinch of good ole common sense, and you  can’t help coming…

I’m not sure if its old age or memory problems, but I often think back to the good ole days. You know, those times when old coins were popping out of the ground with regularity. When you seldom saw anyone else detecting, and when you did, you made sure to stop and shoot the breeze. And no matter how light or easy to use the new detectors are, I still have fond memories of the old “box detectors” with all the knobs that had to be set just so in order to find anything.

I remember the old White’s Coinmasters, the Judge models from Compass, the Groundhog from Garrett, and the heavy Fisher 1200 series, which looked like they could start a car, go to the moon, and provide electricity for your home. I suspect that none of these would hold up to the detectors of today, but they sure did provide me with a lot of fun and enjoyment, and each had its own personality. We were bosom buddies.

On some of those older models the meter was simply a meter… you used it to check your batteries, and that was it. The needle usually went crazy over a target, and you never looked at it. The sound was what mattered.   The tone, the sharpness of it, loudness, and its ability to repeat itself with additional sweeps were what mattered.  Sweeping over the target 10-15 times was the norm. I also fondly remember “whipping” the search coil on the first VLF/TR models to bring out the “bong” effect, which was the ultimate confirmation that indeed your target was worth digging. And then somebody figured out reverse discrimination, making those sites you’d searched before new again. I could even tell the difference in how various items responded. I could tell if it was a dime, penny, or quarter, and for that matter I could even tell the date before I dug it!  Okay, so I lie a little….

My choice of digging tools? A large screwdriver, with a rounded-off edge. It was not only the norm, it was the best. No pouch needed-it was always in my hand. When I look at the Lesche trowel I am using now, I wonder how I ever recovered anything back then.

I live in Texas now, but I recall those early morning phone calls when I lived in New Jersey, calls from my crazy TH’ing buddies during a hurricane or nor’easter, telling me we had to get to the shore as soon as possible. No matter the hazards, travel plans were made, excuses for not being at work developed, and we were off. It was not unusual to be on the beach detecting with gale winds blowing, and meeting up with old friends from all over the state.

In the good ole days I would come home, clean up my finds, throw the common-date coins in a box, and keep the goodies in 2×2 holders, marking the date, the place I found it, and of course the grade. I also had a junk box (still do) where everything else went. You name it… if it was made of metal, I had one. Someday my grandchildren will look through that box and reinforce their belief that Grandpa was indeed a crazy son of a gun.

If it was made of metal I had one…

I check eBay now, just to see if any of those old detectors I used are available and affordable. They are, and apparently many other detectorists remember them as well because they are bringing pretty decent prices. I often think that if I still had that old Judge 2 or that 6000D I could out hunt  anyone today, but then again it might be old age creeping up on me.

The older I get, the more I think about yesteryear, and I suspect that I am not alone in this regard. Those days were a lot of fun, and I remember them fondly, but there’s still a lot more to be found, so excuse me. I need to think of some excuse to tell my wife so I can go detecting. See ya later!

If you happen to be a coin hunter and facing a long hard winter, let me offer a suggestion.  Sit down and go through your past finds and look for “semi-key” dates.   In particular, pennies, dimes and quarters. 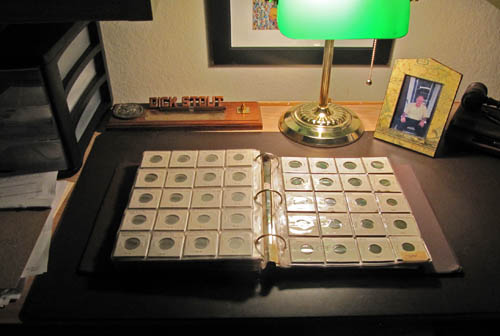 When I started out in the 70′s I used to put my silver finds in a 2×2 and label it with the date, location and the approximate condition.  After that I filed them away in coin boxes, notebooks, and stored them in a closet.  Every once in a while I would pull them out and look at them, primarily to get a feel for what location I might return to, but that was  pretty much it.  Then a few years ago I looked up a couple in the latest Red Book and was floored how much they had increased in value. 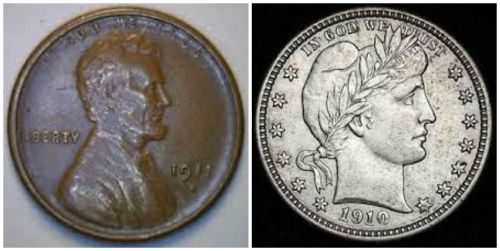 I started pulling out my books/folders/boxes and discovered I had quite a few coins in the VF to XF grades that were worth a helluva lot more than when they were found. I knew the 1914D penny was a semi-key, but was amazed by how much it had increased in value over the years.  I was also very pleased with some of my Seated and Barber coins in VF to XF condition…

Be sure to check the early wheat cents and Mercury dimes w/mint marks, as well as the Barber & Seated.

A few links to help…