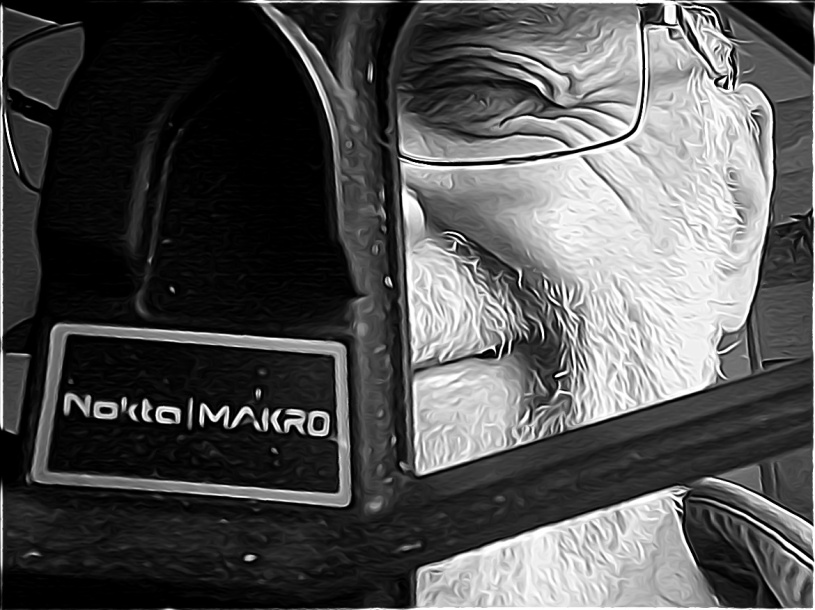 For the past few months I’ve heard nothing but good things about the Nokta Simplex+ from people I respect and when the company came on board as an advertiser they asked if I would consider doing a review.  I agreed with the understanding that (1) there was no deadline, (2) it wouldn’t be lengthy nor technical and (3) that I can be brutally honest in my evaluation.

Understand it has been years since I’ve reviewed a detector and this will not be your typical field test. I’m older now and don’t have the stamina, nor the patience to deal with complicated and confusing procedures. Even worse, at the moment I don’t have that many decent places to hunt…

I will hit you with the bad news upfront. There’s no video of me unboxing and assembling the detector. If that sort of thing excites you Google it! Also I’m not going to go into a lot of detail on all the various functions, settings, features. The Simplex+ has been out long enough now that there’s any number of reviews, field tests and YouTube videos, plus you can find the owner’s manual online. The other upfront news is that this detector has a helluva lot going for it!

When the Simplex+ was delivered the box it was in was small (12″ x 22″ x 5″) and I wondered if there was really a metal detector inside or if this was going to be an Ikea kind of project?  I opened it and much to my surprise there was indeed a detector in there as well as wireless headphones, a manual and a Nokta cap to boot. 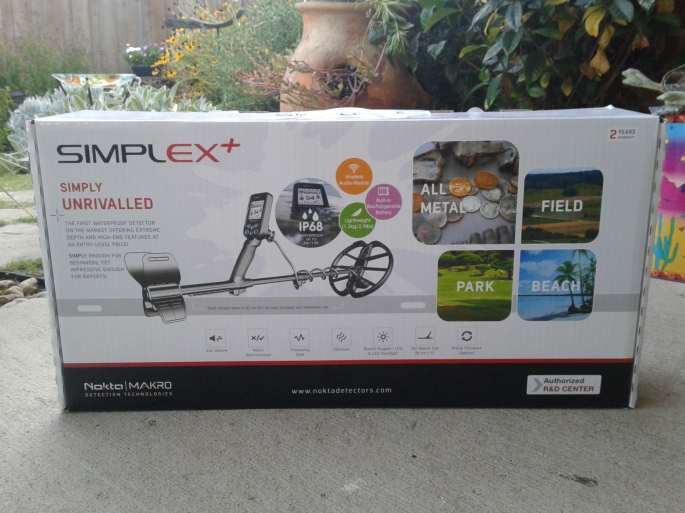 The Simplex+ comes standard with an 11 inch DD coil was a snap to assemble. The straight, rectangular shaft was easy to adjust thanks to two “levered latches” (why all the manufacturers haven’t gone this route is beyond me) and using the telescopic feature the detector can be shortened to 25″ for easy transport or packing. I was extremely impressed with the overall quality of construction and once assembled the Simplex felt very comfortable, as in balanced and lightweight (2.9 lbs). 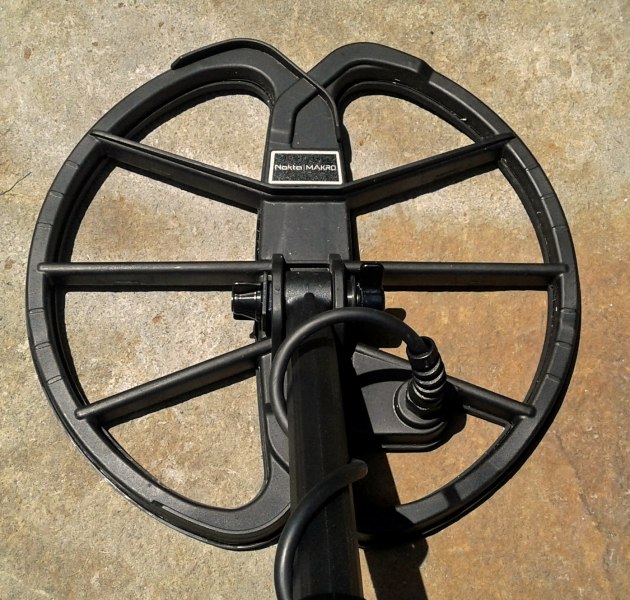 The Simplex+ comes with an eleven inch DD coil 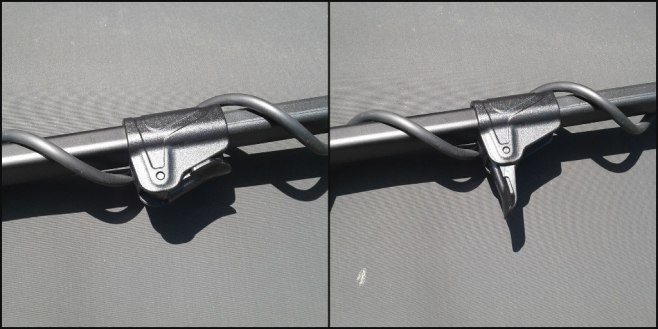 After assembling the detector I decided it was best that I charge the detector (built in lithium battery) as well as the wireless headphones. Out of the box the detector indicated a nearly full charge and headphones apparently weren’t bad either but I charged them both anyway. The headphones, which according to the manual typically take 3 hours for a full charge, only took fifteen minutes and the detector 30 minutes to “show” a full charge.

Still not sure how I feel about lithium batteries but willing to wait before passing judgement. I understand the reason for them and appreciate the efforts at making our toys lighter and easier to use. Just always liked that feeling knowing I had backup batteries when I was in the field. 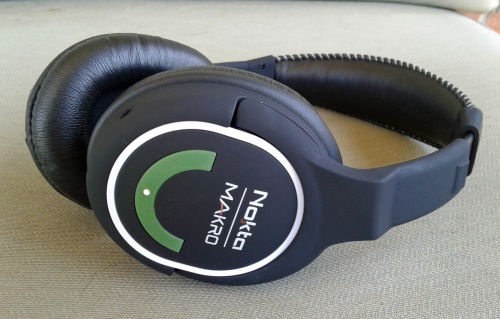 I turned the Simplex on and was impressed with the layout of the display. Numerical scale on top, five search modes below, then a sensitivity barometer on the left and a depth indicator on the right. The very bottom of screen looked somewhat daunting but after reading the manual the icons were easily understood and at my age that’s saying something. 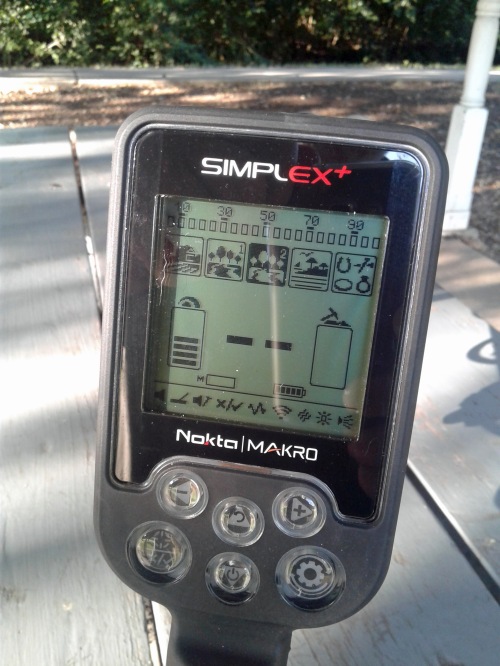 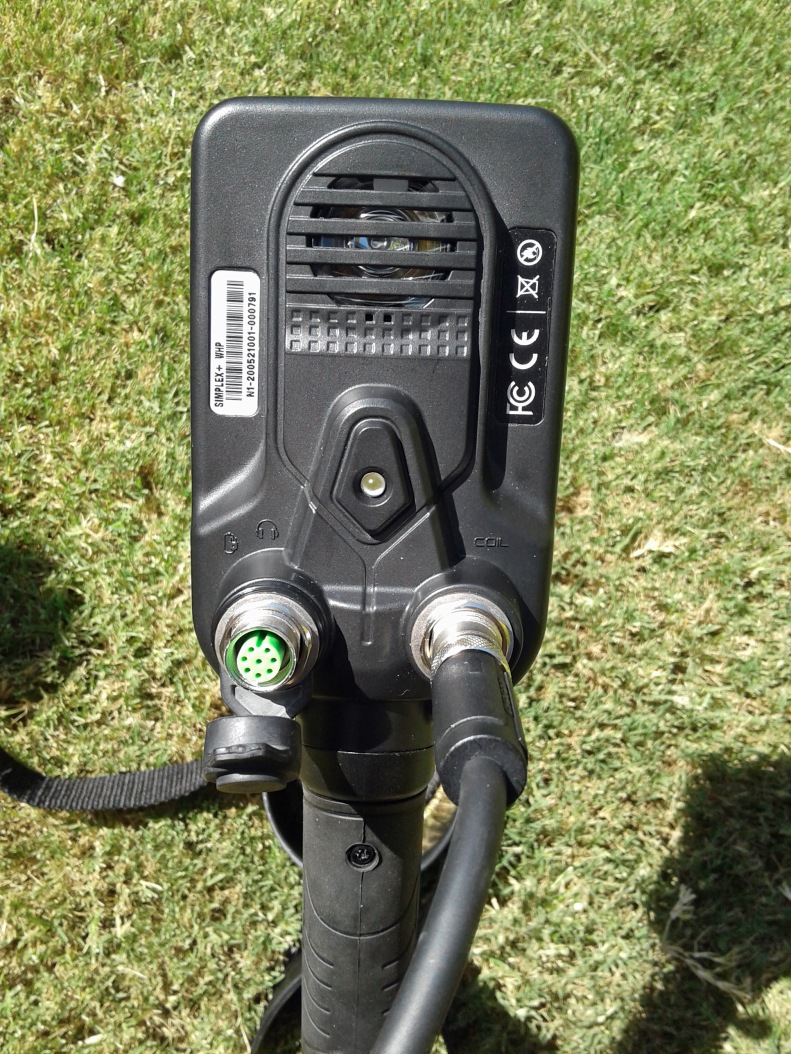 Back of detector features speaker, LED flashlight and input for charging the built in lithium battery.

Pretty sure I got a little too industrious with the following diagrams since many of you are already familiar with the Simplex and it’s features.  Nonetheless…..

ALL METAL MODE – Ground balance a must. Threshold tone and no disc. Same tone for all targets, audio increases as you get closer to target (VCO)

BASIC SUMMARY – SETTINGS AT BOTTOM OF DISPLAY (left to right) 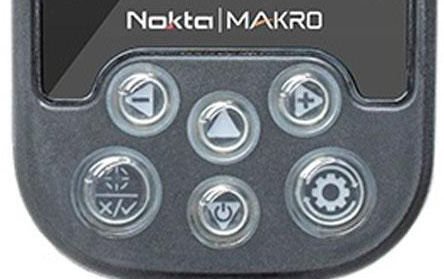 TOP LEFT – Arrow/left side navigation in notch and will change value in any setting.

TOP RIGHT – Right arrow, right side navigation in notch and mode selection – will change the value of any setting.

…I took the Simplex out into the side yard where four years ago I had planted a few coins. Back then I neglected to write anything down and I honestly had no idea of what I had buried, where I buried it or how deep. Anyway I set the detector to “Park 1″, sensitivity to 3 notches and started scanning. I quickly got four or five consistent and very crisp signals, two or three with good numbers and a couple mid range. I dug three, one an Indian head at about 6″ (readout 60), a Liberty nickel at 5″ (readout 29) and a Mercury dime at maybe 8” (79 readout). Pinpointing was amazingly accurate with the sweet spot on the coil being directly under the Nokta/Makro label (cool icon of concentric circles  on display that narrows down to one when directly over the target).

Next using a tape measure I performed air tests on a few coins and was impressed – good consistent and repeatable responses at 8 to 10 inches on average and maybe a little more in the “Field” mode (and yes I know this is not a good barometer of how deep a detector will go).

I was anxious to see what the Simplex would do in the field and headed across the lake to the small park where I recently found a silver dime (yup, big deal right now). Fortunately for me it was deserted when I got there. It was also in the nineties with a heat index of over 100 so a break or two was going to be in order.

I set the Simplex to “Park II”, sensitivity at 4 and started scanning near where I had found the dime. I dug the first ten or so responses to get an idea of what the machine was seeing and wound up with a few modern coins, a key, a tab or two and a crushed can.  All were maybe five or six inches deep. Using the tabs and a coin I played around some and was surprised at the detector’s ability to separate the good from the bad and with an 11 inch coil at that. Had me wondering just how good the smaller coils must be…

After a while I gave the “field” mode a whirl and found myself liking the two tone audio responses. It also seemed to be a little deeper than the “park” mode though I couldn’t be sure. I had a few weak and repeatable signals but didn’t attempt to recover them because of how dry things were. 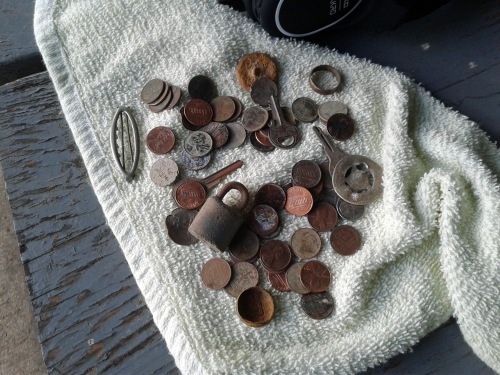 Few of the goodies minus the trash

Without a blow by blow I spent maybe a total of two hours at this site and came home with a good handful of change (all clad with three or four wheaties thrown in) and the usual trash suspects. I was tired, my back ached but I was starting to fall in love with the Simplex. Easy to swing, wireless headphones and believe it or not I was getting comfortable navigating the various functions. Oh and that pinpoint function? C‘est magnifique!!

The next morning I took an Aleve and headed just down the road to a wooded parcel of land that once held two homes. I had hunted it before with my grandson Lucas and knew it had the potential for silver. It was however a trashy area thanks to a middle school being 100 yards away. On the plus side thanks to the shade the ground wasn’t quite so dry.

I decided to start hunting in the “field” mode but that lasted all of maybe 20 minutes. The site was a smorgasbord of trash and despite lessening the sensitivity and notching out a few items I had to switch back to the “Park II” mode. I gave this site about an hour and recovered six pennies (one wheat) and two clad dimes. I also came home with an apron full of trash and so my back wouldn’t feel lonely, two very stiff knees.

After two days of moaning and more backyard experimenting with the Simplex I headed back to the middle school I just mentioned. In back was a very large open field that neighborhood kids have been using for everything – football, soccer, track, biking, frisbee, you name it. Close enough too that if needed I could crawl home. This time the “field” mode worked well and I settled into the two tone responses. I dug a few of of the lower numbers/audio responses to see what I was missing but unfortunately nothing good was disguising itself as bad.  After a few shallow clad coins I gave the all metal mode a shot, found a few more shekels, nothing earth shattering, and headed home.

It would have been great to have found a piece or two of silver, a ring, something worth bragging about but I did not. I have no doubt however that the Simplex would have found them if they were there. I visited the park twice more and recovered a few more clad coins but more important the Simplex and I became real good friends. It’s easy to swing and I love the crisp audio responses, target separation, precise pinpointing, wireless headphones and the notching function was easy and straight forward. The Simplex also “seems” to have excellent depth though I didn’t really have the chance to find out. Hopefully with cooler weather and a little rain I will. Finally as much as I hate push pads the button sequencing on the Simplex was user friendly and navigating the various features didn’t take long at all.

In my opinion the Nokta Simplex is a damn good detector and far from being an entry level machine. Its waterproof, submersible to ten feet (same for headphones). It offers notch discrimination, frequency shift (3 levels), Iron volume control, “vibration” mode, back lit screen, LED flashlight, six levels of sensitivity, online updates and a two year warranty. That’s a lot of detector for $299!! It’s also now my “go to” machine.

Looking forward now to cooler weather, better ground conditions and having enough shekels saved up for the either the 8.5 or 6 x 9 coil. Will keep you posted…

35 responses to “The Nokta Makro Simplex+”