A Way With Words… 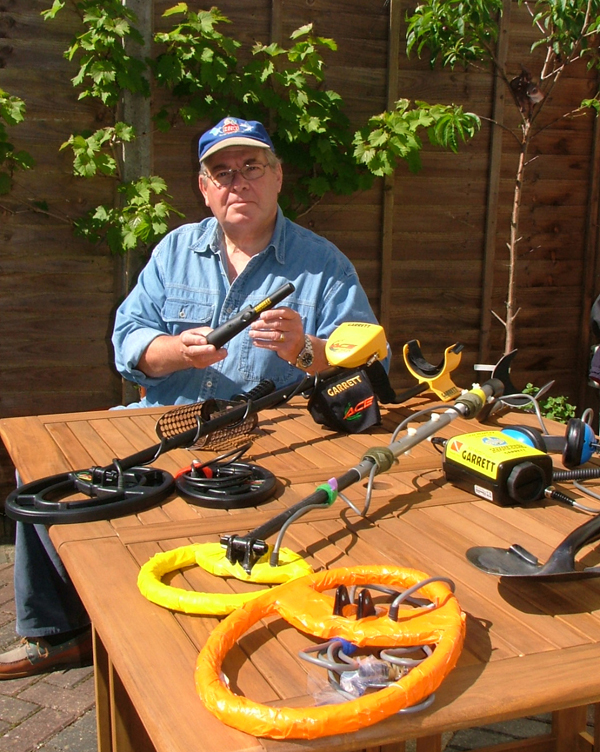 WHAT WAS I THINKING?

Asked my friend John Howland to help me with the glossary for my latest book but I think it was a mistake.  So far I’ve gotten these back….

CUSTOM PROGRAM – 2 shots of bourbon, 1 of green Chartreuse and a splash of bitters

NON-MOTION – Why they usually throw me out of the pub

REJECTION – The story of my life

RELIC – What all the women call me

THRESHOLD – How long I can go without a beer

He did however give me permission to share a revised article he wrote for Treasure Hunting magazine a few years back.  Appreciate it Bubba.

Members of Florida’s Suncoast Research and Recovery Club (SRARC) uncovered a maritime mystery while out beachcombing with their metal detectors. It was complex mystery so baffling that it sent marine archaeologists, shipwreck historians, and dedicated treasure hunters alike, scurrying about on two continents as they tried to fit the pieces of the jigsaw together to reveal the whole picture.

The story got into its stride back in 1987 when several SRARC members lead by their very able guide, Dennis Ranney, recovered a selection of Spanish gold and silver coins from Wabasso Beach, Florida. The coins dating from 1807 from the reign of King Carlos (Charles) IV, similar to those shown, were of no great numismatic importance, but nevertheless of the type that self-respecting treasure hunters, worth their salt, would die for. Historically the coins were of enormous value; the keys to unlocking a fascinating 165-year enigma. 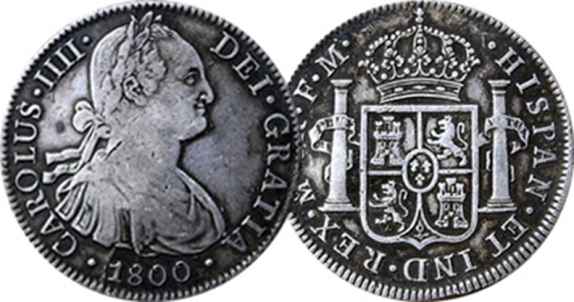 It was only after many hours of painstaking sleuthing in England, that uncovered an all-important snippet of information that had lain undisturbed for many years.  The researchers realised that here before them was an intriguing salty tale bearing all the hallmarks of an 18C equivalent of a combined CIA/MI6 undercover operation that had gone drastically and tragically wrong.

Had there been in those far off days, the type of investigative journalism we have today, it’s likely it would have been dubbed, ‘Wabasso-Gate.’

Back in the States, Ranney soon realised the historical importance of the coins bearing in mind they originated from a known ‘shipwreck beach’. He  knew they required the kind of scrutiny outside his domain. He sought the assistance of the renowned shipwreck expert, Key West’s David Moore, an archaeologist working for the legendary Mel Fisher and who by strange co-incidence was engaged on an in-depth mapping exercise logging all Florida’s shipwreck sites. Moore’s expertise was backed by hundreds of hours of practical diving experience, having previously dived on the Henrietta Marie, San Martin, and the now legendary, Atocha

Re-checking his comprehensive shipwreck database, Moore realised that the location of Ranney’s coin finds neatly dovetailed with his own data regarding the location a wrecked, British registered ship, the ‘Spring of Whitby’. This wreck had come to his notice some twenty-two years earlier, when back in 1965, a ship’s bell, cast in bronze and bearing the legend, ‘Spring of Whitby,  was discovered on Wabasso Beach. The bell was duly logged with the Florida State Board of Archives and the given the finds reference ‘18’ and here in the Florida archives, the ‘Spring of Whitby’ languished until Ranney’s coins came to notice.

Displaying his characteristic thoroughness, David Moore discovered and hardly to his surprise, an entry in the New Register of Shipping, an 18C reference book, published by the English Society of Merchants, Ship Owners and Underwriters, that the ‘Spring of Whitby was duly listed.

The entry shows her keel was laid down in 1800 and commissioned for service in 1801. The Register also showed she was a ship of 379 tons, single decked with beams, armed with four, four-pounder cannons, and four six-pounder cannons. Further entries showed she drew seventeen feet when fully laden, and certified ‘A1’. In all, she was a sturdy, well-found vessel.

Contemporary records also showed that between 1801 and 1811, she plied her trade between the English east coast port of Whitby, and London, and the Baltic port of Riga, working as a collier (coal carrier). Further records showed that in 1812 she was bought by “Feard & Co”, and skippered by “R Feard Esq.”, working out of London.

In 1816, she changed hands again, purchased by her Captain “R Feard” and skippered by a man called “W Howe.” Under Howe’s command, she worked the routes between Quebec and London.

Changing hands for a third time in 1818, she was bought by “F Skelton” and until 1826, worked the routes between London/Riga/New Brunswick/St Andrews, and Riga. The records also showed that during the years 1824/25/26 she operated between London and Riga. There were no further entries in the New Register of Shipping after 1826. Therefore, it is reasonable to conclude that she was either scrapped or lost at sea, sometime after 1826.

The final mention of her in 1826 shows that she was outbound from London to Riga, yet the Florida Archives clearly show that she ended up, not in Riga, but wrecked three-thousand miles off course on Wabasso Beach. This in any Mariner’s Log, is some kind of compass error!

Considering the discovery of the ship’s bell and later, Ranney’s coin-finds, adds considerable weight to the theory that contemporary English records were knowingly falsified to conceal her cargo manifest, routes, true owners, and final destination. But why?

Plagued by this riddle, Ranney and Moore contacted me, and I began a detailed search in England. Poking around in the many maritime nooks and crannies, I chanced upon Captain Cliff Felgate, MRIN, MNI, Royal Navy, Rtd, who by a masterful stroke of good luck happened to be the Curator of Shipping at the Whitby Museum in Yorkshire. He was also a leading light in the Whitby Literary and Philosophical Society (founded 1823).

It was following Captain Felgate’s involvement, when the fertiliser collided with the air-conditioning! Searching through Whitby Museum’s dustier reaches, he stumbled across contemporary records written in 1800. These read:”1800. Spring, ship, 397 tons, built by Fishburn and Broderick. Owners Joseph and William Barker, Captain, Constable Dunning. Length 110 feet, breadth 29.2 ft. Sold to British Government and registered in London.”

Here then, thanks to Captain Felgate’s diligence, was confirmation that David Moore’s preliminary investigation as to the Spring’s vital statistics were correct. Though some questions remained unanswered, in particular who had owned her initially?

Paradoxically, on the one hand, the New Register of Shipping nominated, “J Baker & Co” whilst records in Whitby, said it was the British Government. “Something,” as Hamlet might have put it, “is rotten in the state of Denmark.” My further enquiries at the Ministry of Defence in London elicited this reply: “We have searched both volumes of JJ Colledge’s Ships of the Royal Navy and cannot find any reference in these to a ship named ‘Spring’, or ‘Spring of Whitby’.”

Therefore, was the “J Baker & Co” entry in the New Register of Shipping merely an alias  for the British Government so as to confuse or mislead subsequent enquiries? And if so, why? Perhaps we shall never know, but her true High Seas role, remains open to educated speculation.

Records show that in 1826, she underwent a considerable re-fit, having her topsides, decking and spars refurbished, putting her back into ‘A1’ condition, and all before her ‘final’ recorded voyage to Riga. Which now begs the question; what was a British Collier doing in Florida waters apparently laden with Spanish gold and silver coins when official records back in England show she was bound for Riga?

At this point, Ranney’s coin finds take centre stage. Were the coins payment for some illicit cargo already delivered, or, were the coins en route to an unknown third party for services to be rendered – services that must be kept secret? Was the ‘Spring’ wrecked leaving, or entering Florida’s waters?

Whatever she’d  been up to, I strongly believe that she had been involved in that most vile of human endeavours and misery…slavery. The English Government had already and reluctantly bowed to what was then considered ‘radical pressure’ from those opposed to the loathsome trade in human cargoes. With typical compromise, the British, while failing to outlaw slavery outright, simply banned the carrying of slaves on British registered ships. And herein I think, lays the answer to this conundrum.

It is reasonable to assume that a cabal of well-heeled and probably well-placed individuals with contacts in the corridors of power, were doing more than just  a little tax-free moonlighting by trading in that vilest of trades…slavery.

The proof that the ‘Spring’ was a clandestine  ‘slaver’, will perhaps come about one day when the paraphernalia of slavery, leg-irons, shackles,  and the like are found at the wreck site by someone armed with a metal detector.

Let’s hope that whoever finds them doesn’t throw them away thinking them  junk!

John Howland lives on England’s south coast on the rim of Poole Harbour  – the world’s second largest natural harbour in the County of Dorset. A semi-retired writer/editor  he’s been an active treasure hunter for over 42-years and throughout has been an uncompromising defender of the metal detecting hobby; a founder member of the UK’s National Council for Metal Detecting. He helped with the founding of the FMDAC when Dick Stout was its driving force. Today, he enjoys beachcombing, bass and trout fishing, and describes himself as a ‘recreational’ user of single malt Scotch whisky. Dick Stout owes him 20-Bucks……….

Be sure to subscribe to John’s Blog “Detecting & Collecting“

5 responses to “A Way With Words…”