Sad News From Across the Pond…

I was saddened to learn today that UK detectorist Stephen Grey’s wife Rachael passed away. My condolences to Stephen and family… 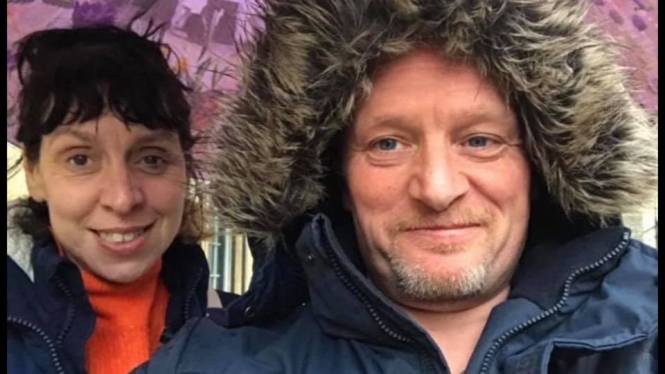 While scattershooting the other day I came across this photo on Facebook, and being the curmudgeon I am I just had to share it.  I contacted Stephen Grey, the detectorist who posted the photo, and not only got his permission to use it but also the following story about Derek, the gentleman in the photo….

A CITY BOY IN THE COUNTRY

I’m a city boy born and bred so I am . I’ve lived all my life in an English shipbuilding town . I have a craving to be out in the countryside however any spare minute I get . Although it is good for my health and the scenery is beautiful these are not what drive me . It’s all about that next elusive signal . I’m a metal detectorist you see and I’m constantly searching . If you asked me what I’m searching for I couldn’t rightly tell you . I’m not overly anxious to dig another coin or relic .

The greatest high I get is when I hear the faint audio of another signal , another target . I’ll quickly sweep my search coil over the area until the audio confirms that I’ve found what I’m looking for . That’s what it’s all about for me , all about the beeps as I say .

Another huge bonus is the friends and connections I make in this hobby . Because I run detecting groups on Facebook and have a YouTube channel I get out many times meeting friends and making new ones .

Although I really enjoy looking after my father who has dementia the hobby provides me with a window on a whole new world . A world of constant learning , of history and most importantly of comradeship . I regularly travel across the country to meet up with my buddies far and wide .  I like the open road and the possibility of adventure . Although I am rooted in my home town still I have spent many years on the road working from the highlands of Scotland to way down on the south coast . So to get in my car and drive four hours to find that next target is easy for me . A little joy ride and another pleasant day in good company .

People like myself would not have a hobby tho unless the farmers we asked graciously gave us access onto their fields . The fields of glory as I often call them .  Not so long ago I didn’t have access to many of my own farms . One day saw me 30 miles from home in the Cheshire countryside . Not In search of the next signal but in search of the keys to the kingdom , friendly farmers who would give me permission to search their fields .

I’d had a few refusals for all the right reasons , many farm houses were also empty when I came calling . A couple of hours go by and I turn down a small country lane . One house from the 1800s stood on the side of the road . It looked a little lived in to say the least . A spry cheery looking figure sat atop an old Massey Ferguson tractor nosing out of his drive way . Aha goes my detecting brain and before I know it I’m out of my car and walking over to this old boy . He looked to be in his eighties , cheery looking but also wise . The type of person it would be pointless being anything but yourself with because this chap would see right thru anything not quite right . 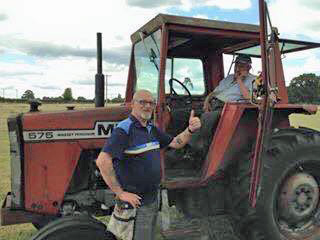 I said hello and went thru my spiel of what I was about and how he could help me if he so chose to . He listened patiently with the occasional nod of his head . Then just asked straight out if I was a decent sort of person . How could I not but take an immediate shine to my new friend farmer Derek ? I laughed heartily and reached into my pocket and pulled out some silver coins from the 1800s . I crossed Derek’s palm with silver and so our friendship began .

Many times I would go up to that area to do some detecting and spend a good few hours chatting to Derek instead about days gone by and also looking at his amazing selection of ancient tractors . Some belonged to Derek’s father and Derek himself was 84 when we first met . He told me of his father’s time during the war years . He carried on running his farm whilst serving in the home guard and patrolling the ridge at the back of the farmhouse . No doubt some of the shell casings me and my friends found harked back to those dark days .

Stephen on one of Derek’s antiques…

He told me how to keep rabbits from making even more of a mess of the local graveyard and its tombs . He used to put ashes down the holes that were literally sitting on top of his families graves . He told me how to kill vermin and swore me to secrecy . He alluded to so much more but most of the time that wry smile would appear and he’d say he’d get into trouble if he told me any more .

We would have a good laugh then and move on to the next subject . Tractors , vermin , country characters long since gone . Such was the time we spent chatting together . Sometimes I’d see him cutting his hedgerows or chopping wood on a band saw run from a belt on the back of his tractor . Eighty four years young and so full of life .

Time passed and Derek helped me get five of his neighbours farms . Myself and many friends have passed endless days up there after that next magic signal . For a city boy like myself I feel truly blessed to be able to indulge in my obsession in such beautiful countryside .

One day I went up for my regular chat and he came to the door not looking his usual chipper self . He said he had a gall stone problem . I cheered him up with a bit of banter and shook his hand . A few weeks went by and things had taken a turn for the worse . Poor Derek was in the wars and he mentioned the word tumour . I tried to keep him up beat and persuade him it would all be fine eventually . I sincerely wanted to believe that myself . I shook his hand again and this time left with a heavy heart .

A couple of weeks went by and this time when I knocked his lovely wife answered the door . She gave me some news that really upset me . Poor old Derek was terminal and wasn’t eating and was bed bound . His dear wife was very practical about it all explaining that he was 85 now and had lived a good healthy life doing what he loved . I couldn’t help but admire her courage although I was deeply saddened . I left that morning with a heavy heart . I had driven one hour to get up there tho and I’d brought a friend along . We went ahead with our days detecting and somewhere along the line I decided to make the most of it because that’s what Derek would have wanted .

More time passed and a disturbing thought kept popping into my mind . That because I wasn’t family I’d never get to see old Derek again . After all he was very weak and bedridden . Imagine my surprise when I next saw his wife , me thinking maybe the worst had happened . She informed me that Derek was out in his yard with his daughter and grandchildren amongst those amazing tractors where he belonged .

Such is the circle of life , they’d put him on a course of steroids that had reinvigorated him up to a point . I was so happy to see him and also to meet his daughter and grandchildren for the first time . They were highly amused when I told them Derek was quite famous around the globe these days thanks to the wonders of Facebook and YouTube .

If I never see my favourite farmer again I’ll not be sad this time . Life is a circle and it must turn . I had a good chat with him that day . I’ll never forget the look in his eyes . So wise , a real piece of the landscape up there . Like a mighty oak hit by lightning he will be greatly missed . Never will he be forgotten and I’m sure he’ll still be out and about in his ancient tractor long after I have passed on .

4 responses to “Sad News From Across the Pond…”