A Little Dis, a Little Dat…

Got to love it. XP has just announced the “Orx” and it looks to me like a response to the Minelab Equi”Nox”. At least that’s my take. What do you think?

Interesting too..the “More information and availability coming soon”. Apparently the manufacturers have finally realized that rushing out a new product is not always best for the bottom line. Likewise just the mere mention of a new machine might make a tekkie hold on to his or her shekels a while longer.

My question now is when will the American manufacturers come up with models that are similar in design and weight?

Be sure to check out The Relic Recoverist – Jocelyn Elizabeth’s new website. It’ a dandy….

Going through boxes of items recovered after the tornado I found a Q & A article I did with Eleanor Hube (Western & Eastern Treasures) years ago.  Despite the material being somewhat dated I knew I had to share it again. Eleanor is without a doubt one the real pioneers in the pastime.

Eleanor Hube…One of the Grand Dames of Metal Detecting

For those of you who might not know the true meaning of Grande Dame…the dictionary defines it as “a respected woman, having extensive experience in her field”, and I can think of no one who is more deserving of this title than Eleanor Hube. I suspect the name might not mean much to many of you reading this magazine but if you’ve detected for quite some time you most definitely know this fine lady.

I first met Eleanor and her late husband Jack back in the 1970’s, while attending various club hunts in the northeast. They were treasure hunters and the owners of J&E Enterprises in Suffield, Connecticut. At the time I was attempting to not only hone my skills as a detectorist but also start a national organization (now known as the FMDAC). I felt as though I had known Jack and Eleanor simply because their names were legend, and their many finds were plastered all over the various treasure hunting magazines and manufacturer catalogs.

It didn’t matter what your forté was, coin hunting, relic hunting or water hunting (which was just really getting hot at the time), they could and would out hunt you day in and day out and make it look easy. She and Jack lived treasure hunting, traveled everywhere and anywhere and were two of the finest ambassadors of the pastime I have ever known. It seemed no matter where I went, or what event I attended, I ran into the two of them. We had a lot of fun and I always came away a better TH’er.

I lost touch with Jack & Eleanor when I moved to Texas in the late 80’s and was saddened when I heard that Jack passed away in 1995. I knew however that Eleanor would surely carry on the tradition and she didn’t disappoint.

Eleanor continued to spend her days and nights pursuing the next signal, the next find, the next treasure, both here in this country and throughout the world. Talking to her about doing this article was infectious, and I was tempted to pack up the detector, and head to the northeast to join her for a few days on the beach. Her stories, the hunts and the finds amaze me, and truly hope that she will find the time someday to sit down and share her experiences and expertise with everyone in the pastime by way of a book. 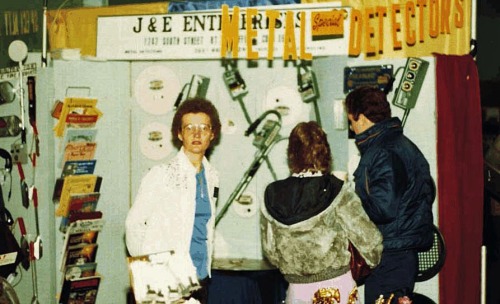 Q. Eleanor when did you start metal detecting?

Q.What was it that got you interested in metal detecting?

A. I was a coin collector, and got a big thrill out of finding them with a metal detector.

Q. What was your first metal detector?

A. A Heathkit model that Jack assembled with the help of everyone in the family. Jack was color blind, and we all had to read the blueprint information, making sure we handed him the right circuits at the right time.

Q. What was your very first find?

A.. Don’t remember specifically, but it was just a common date coin. It did however let me know the detector really worked as advertised.

Q.What was your first “good” find?

A. A very old Spanish coin, and twenty years to the date of finding it I gave it to a very close and dear friend of mine named Barbara, who was with me at the time. I think it was a coin a relative of hers may have lost.

Q. Eleanor where did you spend most of your time initially?

A. In the beginning I did a lot of hunting in parks, but later on I really got into detecting in the water.

John Govoni and Eleanor searching the beach in Okinawa

Q. How long did it take you to find your first silver coin?

A. Don’t remember exactly, but it was pretty quick.

Q. How long did It take you to find your first ring?

A. The first year, simply because I dug up everything that beeped.

Q. In the beginning, how did you go about finding places to detect?

A. I got a lot of information from reading treasure magazines, and by joining The New England Treasure Finders club. Later in 1975 Jack and I formed a club in Hartford, Connecticut…The Yankee Territory Coinshooters. They’re a great club and still going strong.

Q. Were you a loner in the beginning, or did you go detecting with a partner?

A. I pretty much had a partner in the beginning. It made getting out a lot more fun. 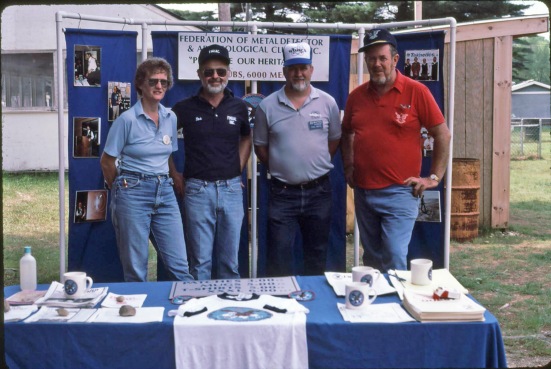 Q.What would you consider to be your best find after all these years?

A. You know what the answer is. It’s truly the friendships I have made all over the country. They have given me more pleasure than any one single find.

Showing off Mongolian coin from hillside in Russia, 1994

Richard MacRobbie, the late Paul White, and Eleanor, from FMDAC trip to England in 1985

Q. Eleanor what would you consider your weirdest or funniest find?

Q. What is the one item you are still searching for that has so far eluded you?

Q. Do you attend open hunts, and if so what are your favorites?

A. Yes I do, and I’ve always been proud to be the woman to beat. Lately the only hunts I attend are the ones sponsored by the Gateway Treasure Hunters and the Massachusetts Association of Treasure Hunters.

One of Eleanor’s fortes…recovering lost valuables. This one an extremely valuable diamond ring, 2005 Provincetown, Massachusetts

Q. What metal detector(s) are you using today?

Q. What accessories do you use?

A. Pretty much the normal items…headphones, leather bag, probe, spade and a magnetic light. In the water I use a cloth bag and long-handled stainless scoop.

Q. How often do you get out detecting today?

A. Not very much at all. In March 2006 I had an auto accident, and in September of that year I had a knee replaced. Then in May 2007 I was diagnosed with Shingles, and in February of this year I had the other knee replaced. I do try to get out a few times each month, if my hand and knees allow. A main part of my business now is helping people find lost items. In 2005 I found a $15,000 ring for a very happy lady.

Q. What do you see for the future of the pastime?

A. I hope it’s around for a long time, but I worry about it. There are still a few detectorists out there making a mess in many places, and that concerns me.

Q. What can detectorists do to promote the hobby?

A. Be courteous, friendly, helpful and especially neat. 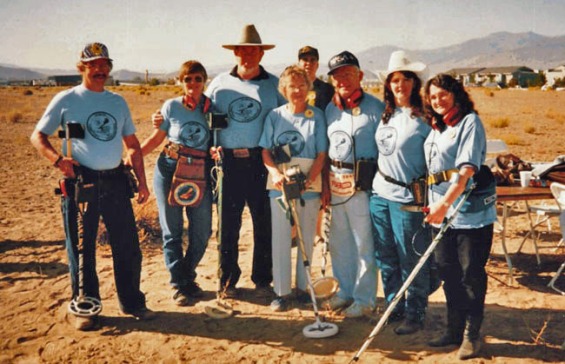 Q. If you could pass along one or two words of advice to other detectorists, what would they be?

A. Enjoy the hobby, but always, always remember that what you do in the field affects all of us!

Today Eleanor is still running J&E Enterprises, but now it’s home base is Cape Cod, Massachusetts, an area that Eleanor had always dreamed of moving to. Her shop is located at 54 Old Main Street, in South Yarmouth, and offers everything for the detectorist. If you live in the area be sure to stop in. and if not you can check out her store by visiting http://www.capecodmetaldetectors.com 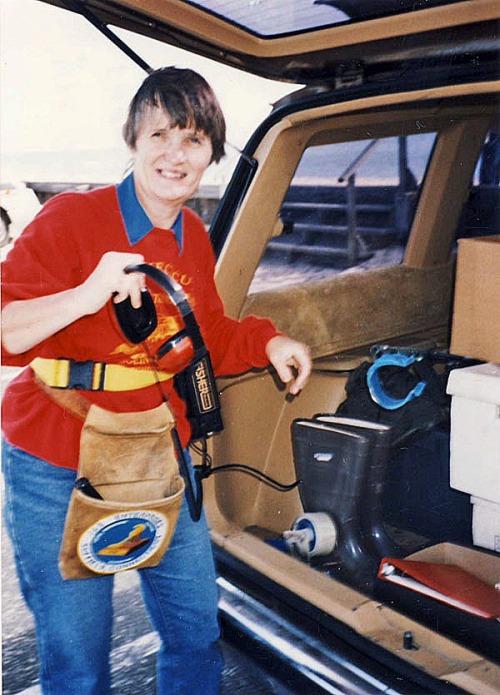 As I was finishing up this article I called Eleanor, and welcomed her home from her second knee replacement surgery. She was not only happy to be home, but overly anxious to get out detecting, making up for the three weeks she was in rehabilitation. Knowing Eleanor I suspect she had a detector in her hand while we were speaking, and more than likely was heading to the beach after hanging up the phone…..

Note: Allyson Cohen, a.k.a. Detecting Diva, did a more recent interview with Eleanor in 2015

An Informal interview with Eleanor Hube

8 responses to “A Little Dis, a Little Dat…”