A few off-the-wall thoughts to inspire you on this uniquely sunny Sunday! It’s part of the aging process or at least I hope so…..

From the deep recesses of an aged and wasted brain….

Seems the new Equinox lithium battery is only guaranteed for one year and the company suggests having a repair center replace it when needed lest you do it wrong, allow water to seep in and void the warranty. Do they know something we don’t? And…from what I can see there’s only one service center in the US.

Wonder who will be next to come out with Deus lookalike….

Just my take…if a manufacturer wants to stay relevant (and solvent) their future models need to be wireless and waterproof. Otherwise it’s just another….

Gotta laugh when I watch a video and see a tekkie jabbing his pinpointer in the hole. I mean WTF, is he killing worms or what? No wonder these things need fixin’ all the time.

Have 88 photos of detectors leaning on shovels. Come on tekkies get me to one hundred. They’re so cool…?? 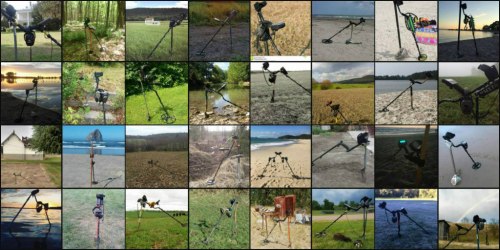 Just a sampling of what matters most today….

So many “detailed”old coins being found today. Well at least on social media they are….

Have five permission letters out there now for large parcels of land. Hoping at least one or two get approved.

Used to be so many detector companies to consider when looking for a new model. Today not so much…

I know it’s just me but I don’t get excited anymore when it comes to the finds I see posted on social media. Just too many, too often and they’ve lost their wow factor. Magazines same thing.

When I worked for Garrett I wanted to offer small mag lights w/bracket that attached to stem for night hunting. Was shot down. I know a few tekkies use them today but why hasn’t a manufacturer offered them with logo imprinted? Hell they have every other imaginable, unnecessary accessory.

Have had six inches of rain this past week and today maybe a little sunshine. In a few months we’ll be begging for a drop of water. Welcome to Texas.

Down 33 lbs (for those of you who don’t give a rat’s ass). Tonight? A little pappardelle alfredo!

Items we used to throw in the trash box are now cleaned, displayed, discussed, analyzed and stored for posterity. Were we hasty or are the better finds simply dwindling?

“We think you may like these pins”…well no I don’t and you’re a royal pain in the ass!

Remember the detector you’re using today because in 30 years you will be looking to buy one again.

It’s a grueling job trying to say relevant in the treasure hunting world. Film and film and film….

Your success is based to the number of times you actually get out and detect, not the detector you’re using.

Newbies today… “Do I buy the detector first or the camera”?

No doubt Kevlar vests will be the next cool tekkie accessory.

If you doubt there are trolls out there looking to kill the pastime look no further than Nigel Swift and Paul Barford. Two sad and lonely individuals who are professional sneaks (or weasels if you prefer).