Meanwhile at the Saloon…

Thanks to John Howland for the following bits and pieces, brainfarts and provocations from the U.K…

The Times are a-changin’ 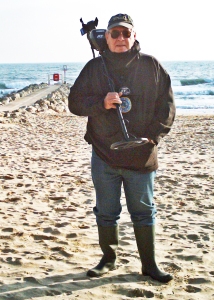 Contrary to how I’m usually depicted by archaeology’s Warsaw wing as a wholly unsavoury anti-archaeology bast**d (not that I give a damn anyway) I’m more than happy to report that mutual co-operation continues to grow between ‘us’ and ‘them’.

Over thirty years ago at the height of the Council for Archaeology’s ill-starred STOP (Stop Taking Our Past) Campaign when they tried to snuff out the hobby in the UK, I was in there, unlike some gutless, modern ill-informed commentators, kicking and gouging for the freedom to detect. We won!

During my many meetings as General Secretary of the National Council for Metal Detecting with representatives of British archaeology, I touched base with a couple of influential arkies, who like me, shared a common interest; enjoyed a beer or three played Second Row in the amateur game and who, also like me, knew some of British archaeology’s ‘pretty boys’ were, tossers.” The consensus was that the ‘pretty boys’ were effectively (at the time) steering archaeology into the abyss and taking the detecting/archaeology debate nowhere. I asked my Rugger chum, “Why not say so?” He replied, “Are you taking the piss? This is my career. I’m sorry, but I can’t, officially. Not yet.” I got the message.

For those beachcombers operating Garrett ATPro Internationals I can tell you that the new £1-coin reads at ‘77’ or ‘78’ depending on distance from the searchcoil; ‘77’ over 3-inches from the coil and ‘78’ closer or immediately under it.

The ‘Big G’ has a new machine in gestation and due on 6th May. Precise details are currently rarer than rocking-horse sh*t and unsurprisingly, the Men-in-White-Coats in downtown Garland remain resolutely tight-lipped about the new arrival.  However, the images in my crystal ball suggest the Marketing Midwife will deliver the new kid on the block in the shape of a wireless, all-terrain jobby, with added depth and even more whistles and bells.

Sired by the ATPro and born of the ATGold, I name this child…ATPro II. Maybe.

The two stories below underline the extraordinary degree of mutual respect, co-operation and artefact reportage existing in the UK between Detectorists, right-thinking archaeologists, and heritage professionals. It also serves to illustrate why the loony wing of archaeology eking out a living on the barren slopes of insanity along with the increasingly dim-witted Council for British Archaeology (who’s Director, Mike Heyworth, curiously supports the fact-free, laughable, guess-work based Artefact Erosion Counter) has become the entertaining, amusing, Vaudeville act so widely enjoyed by Britain’s thousands of Detectorists and I dare say, FLO’s.

In contrast, the Portable Antiquities Scheme (PAS) website carries (among many others) details of yet another amazing recovery by metal detectorists this time in the County of Wiltshire, a find consisting of a bronze cauldron inside which were carefully packed and padded with foliage, two other vessels – possibly cooking utensils. What follows regarding this major find is taken from the PAS website written by Finds Liaison Officer, Richard Henry:

“…The bronze vessels had been removed from the ground by the detectorists, but crucially, they had not attempted to clean the bowls and the delicate remains of the packing material were preserved in place. Finds Liaison Officer Richard Henry has led the exciting quest to discover more about the find. He brought in a team to excavate the site of the discovery, led by David Roberts of Historic England and with the Assistant County Archaeologist, members of the Wiltshire Archaeology Field Group and the finders. Richard then brought in more experts, including Dr Ruth Pelling of Historic England and Dr Michael Grant who identified the plant remains and pollen. Peter Marshall, also of Historic England, coordinated the radiocarbon dating of the flowers and undertook analysis of the results. The project has been led by the British Museum’s Portable Antiquities Scheme and supported by Historic England, Southampton University, the Association for Roman Archaeology and Wiltshire Museum. 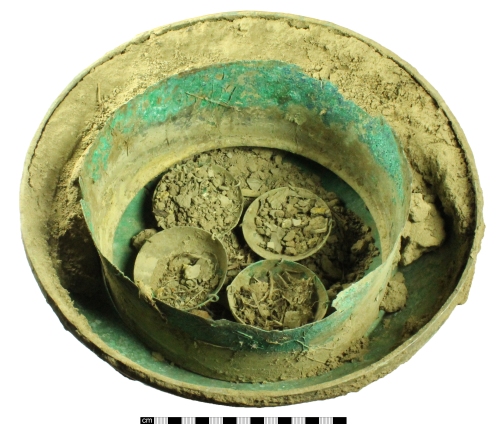 Museum Director, David Dawson, said “Richard Henry has led this remarkable partnership project, drawing specialists from across the country to piece together the fascinating story of the burial of Roman bronze cauldrons that took place on a summer’s day 1,500 years ago. We are thrilled to be able to display this important material”.

Richard Henry said “Such discoveries should be left in situ to allow full archaeological study of the find and its context. The finders did not clean or disturb the vessels which has allowed us to undertake detailed further research. If the vessels had been cleaned none of this research would have been possible”

Ruth Pelling commented that “It has been an absolute pleasure to examine this unique assemblage. By combining the plant macro and pollen evidence we have been able to identify the time of year the vessels were buried, the packing material used, the nature of the surrounding vegetation and the likely date of burial.”

“The PAS has recorded over 1.2 million archaeological finds to date (since 1997). This data has been widely used by academics, students and many others by searching the PAS database (www.finds.org.uk/database). PAS data has been used in over 528 research projects, including 25 pieces of large-scale research and 110 PhDs.

The PAS is a partnership project, managed by the British Museum working with at least 119 national and local partners to deliver the Scheme’s aims. It is an important part of the British Museums’ National Programmes activity which extends across the UK.

As part of the HLF [Heritage Lottery Fund. JH] funded project PASt Explorers, the PAS is working with volunteers across the country to record archaeological finds made by the public and get involved in archaeology. In 2015, 259 volunteers, including 100 self-recorders (metal-detectorists who record their own finds on the PAS database), have contributed to the work of the Scheme.

Tracey Crouch, Parliamentary Under Secretary of State for Sport, Tourism and Heritage said “It is fascinating to think that, thanks to the PAS and Treasure Act, the public are rewriting the history and archaeology of this country. That so many amazing finds are made each year is testimony to the diverse and long history of England and Wales and it is marvellous that these finds then end up in museums across the country for all to enjoy”.

To paraphrase the legendary ‘Yogi’ Berra (success in our pastime like Baseball is); “Ninety percent mental: The other half is physical.” 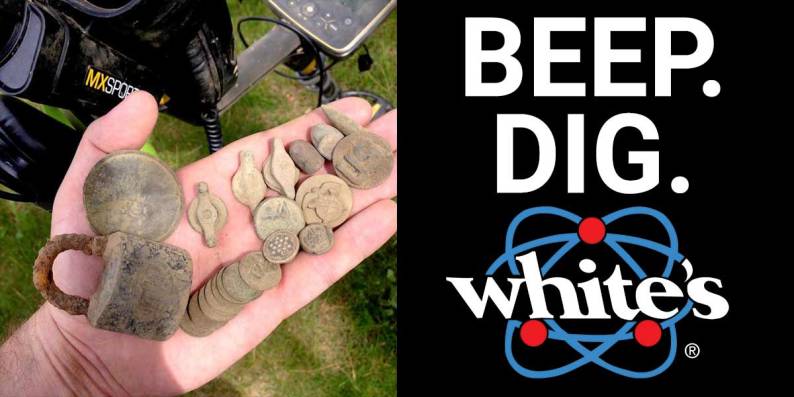 3 responses to “Meanwhile at the Saloon…”