New Statistics for the Pastime…

Big Tony from Bayonne recently commented “This is a simple sport – there is definitely no need to complicate it .

I was reminded again of  this is today when a tekkie on Facebook commented “Just received my TDI SL i must admit I’m a little intimidated by it.”   Then, maybe thirty minutes later,  a TV sports show throws out another one of those off-the-wall baseball statistics…the WHIP rating, like it was everyday verbiage.  I Googled it and found it on a website called HardballTimes.com  For the record WHIP means….

“in baseball statistics, walks plus hits per inning pitched (WHIP) is a sabermetric measurement of the number of baserunners a pitcher has allowed per inning pitched. WHIP reflects a pitcher’s propensity for allowing batters to reach base, therefore a lower WHIP indicates better performance.” 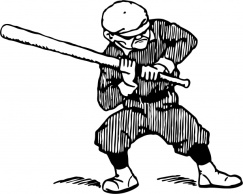 Scrolling down just a tad I found….DER, Defense Efficiency Ratio. “The percent of times a batted ball is turned into an out by the teams’ fielders, not including home runs. The exact formula we use is (BFP-H-K-BB-HBP-Errors)/(BFP-HR-K-BB-HBP). This is similar to BABIP, but from the defensive team’s perspective. Please note that errors should include only errors on batted balls.”

I wondered if it was just baseball that had these batshit crazy statistics, but guess what?  It wasn’t. In basketball there’s BPM, and get a load of this…..

“Box Plus/Minus (BPM) is a box score-based metric for evaluating basketball players’ quality and contribution to the team. It is the latest version of a stat previously called Advanced Statistical Plus/Minus; it is NOT a version of Adjusted Plus/Minus, which is a play-by-play regression metric.”

“BPM relies on a player’s box score information and the team’s overall performance to estimate a player’s performance relative to league average. BPM is a per-100-possession stat, the same scale as Adjusted Plus/Minus: 0.0 is league average, +5 means the player is 5 points better than an average player over 100 possessions (which is about All-NBA level), -2 is replacement level, and -5 is really bad.”

Now I am a very avid sports fan, and in my younger years played a little baseball and basketball, but I have never heard of statistics like WHIP and DER. I suspect they exist because we have become preoccupied with technology and frivolous bullshit.

Take metal detectors….. The manufacturers now offer numbers, graphs, up, down, left and right arrows, GPS, audio responses from The Twilight Zone, NASA sounding names, directions to Noah’s Ark, and a message that if you don’t buy it today, someone will beat you to it.

Understand that I don’t have a problem with marketing, selling, or with anyone pissing away their hard-earned money.  It’s yours to do with as you see fit, but please know that top of the line TDI-CTX-PI, Omega, Delta, Explorer, deep-seeking Piffwanger-Pro, with the “imported” 44 inch, wide scan, elliptical, double D, spider coil, will probably never repay you your initial financial outlay. Well that ought to garner a few emails from the manufacturers.

However, to keep you all happy (and busy), I’ve decided to follow suit with baseball and basketball, and came up with the following metal detecting/treasure hunting statistics & abbreviations, which take effect immediately….

NTALIV = Number of Times Acting Like Idiot in Video

DWMEE = Detectorist With Most Expensive Equipment

So in the future you might see “Henry’s TFPO wasn’t very good, but his ROGTB was excellent, and his NUNBCA was off the wall. His hunting companion Willy, who is best known for his NTALIV, didn’t fare well at all, but his CFSBLC was excellent.

And to make you really happy….here’s another abbreviation ODWPM (old detectorists who piss and moan).

Think I might start a business called Rent a Kid, and franchise it.  It’s for those tekkies who are worried about knocking on doors. A cute little five or six-year kid standing by your side just might make the difference. What do you think?

30 responses to “New Statistics for the Pastime…”