FROM ONE EXTREME TO THE OTHER

Last year we were facing drought conditions here in Texas, but thanks to El Nino 2015 is looking much different. So far this year, from January through April, we’ve received 12.74 inches of rain, compared to 3.83 for the same period last year. Our lakes and reservoirs are finally starting to fill, and the 10 day forecast calls for rain and more rain. It figures I finally got permission to hunt a large and potentially productive site and now it’s water-logged.  Here’s hoping that all this moisture will increase my odds when I finally do get there…..

“Strange. When I hold my detector straight up in the air over my head in this open field during a lightning storm it makes a funny noise. Sounds like dummmassss dummmbbasss. Anyone else have that?”

Ever wonder what the competition would be like if detectors didn’t have a discriminate mode?

If I’m lucky one of the manufacturers will come out with a walking cane that’s a metal detector.  Might be my only hope.

THE LATEST FROM THE MALAMUTE SALOON 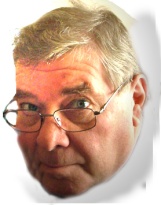 Why do T’hers wear camo? Simple. When you go out treasure hunting in the country you need clothing that will stand up to the rigours of the outdoors and in the absence of other suitable clothing, moderately priced ex-military kit fits the bill. On the occasions I foray into the interior, I usually wear a waxed-cotton thornproof jacket, though not in summer. A British army Dennison smock over a T-shirt is English summer ideal.

In any case, why worry about what Joe Public thinks, or Joe Arkie for that matter. Take a look at the sartorial elegance of some arkies: Matted beards, filthy corduroy trousers, ragged sweaters full of holes,  T-shirts reeking of BO, breaths stinking of booze, and unkempt hair – and the men are even worse!

So let’s have less of this ….”I don’t want to look like a looter’ balls. Don’t let’s get too precious about this. Personally, I don’t give a toss what the arkies say about the way I dress behind my back; just so long as they don’t say it to my face.

Patriot Games or the Idiot’s Delight?

Let’s face it, thieving of archaeological artefacts is – we are told by some pious arkies – is of epidemic proportions. Oh really! Compared to what’s going elsewhere in the world, it’s small beer and hardly a minor consideration in the greater scheme of things when stacked up against world hunger, disease, and despotism.  UNESCO, allegedly the world’s heritage guardian is little more than a shambling, ham-handed, cowboy outfit with a history of corruption scandals. It’s general seen as a  ‘gravy train’ critics say, awash with dosh where high salaries paid to utterly useless operatives is  the norm, and where  few  UNESCO-ists dirty their hands doing what they supposedly are paid to do,  preferring  where unsurprisingly it seems living high on the hog is job perk.

UNESCO takes the easy way out by laying the world’s heritage ills at the door of  so-called ‘looters’ and ‘collectors’ (always US collectors!)  as the root of all heritage evil. UNESCO ought to be disbanded or put on show as the perfect example of ineffectual internationalism.

Why? Simply because the world’s heritage – comprised mostly of  trinkets looted from nations, by other nations, that most normal people wouldn’t give house room.  The miserable even myopic UNESCO is unable to take on board that a partisan archaeological agenda exists mostly for the benefit of politically motivated archaeologists and their wheeler-dealer henchmen.  Ironically, treasure hunters are innocent of any involvement this international racketeering since archaeology’s fat cats have cornered the lucrative market. Those arkies who are balls-deep in the corruption are hell-bent on twisting the situation to persuade the world at large that it’s US collectors, and detectorists worldwide, who are the real heritage villains.

In truth, as some well-placed journalists now claim, countries such as Turkey, Greece, Syria, and Egypt, to name four in the heritage cess-pit, are corruption-rife from the top down. Now we have that pillar of the heritage community, and former coin collector, Lord Renfrew, wringing his hands and advocating that Syria’s’ heritage be protected by the UN. Oh yeah? Big deal. So who’s going to do the protecting Renfrew craves? Yep you’ve guessed it, the UK and the US …again.

Why not I suggest, let Renfrew raise a new regiment…Renfrew’s Fusiliers,  recruited from archaeology’s ranks  and let his wretched pals spill their  blood fighting for what the rest of us  call junk? Would you want your sons or daughters to be conscripted to die in the cause of protecting Middle-Eastern knick-knacks?

You are past your sell by date.

Some Treasure Hunters – Like Some Arkies – are Thicker Than Whale Omelettes

No matter what advice experienced treasure hunters try to pass on to newbies, some – to paraphrase  the Good Book – always falls on stony ground. Take the new Whites detector due to come on stream soon as a prime example.  Take the Garrett Ace 250 too. Both are superb bits of kit and will find you a fortune if you know HOW and WHERE to use it/them.  Both are reasonably priced from two well-respected manufacturers. Sure enough, the price of those so-called ‘advanced’ machines that even purveyors of Columbian marching powder might find eye-watering, will find treasure, and in common with those aforementioned  moderately priced jobbies, won’t find what ain’t under the searchcoil either!!!! In short, I’m afraid to say, price is no guarantee of success.

I use a Garrett ‘ATPro International’ that checks in at around the £500 mark. It gives me improved target data over the ACE 250, though the latter, produced a huge amount of coins. Indeed, it never ceases to amaze me that metal detector manufacturers allow their products to be test driven by (so-called!) near illiterate detectorists who don’t know their arses from their elbows. The detecting press is not above censure either. My heart sinks when the opening paragraph of a review begins…” I opened the box with excitement…..” God save me from these morons.

The new Whites will have good depth penetration…why? Read Dick Stout’s piece to find out. If you still look dazed and can’t fathom it out, read one of his books. One thing’s for sure, buying an expensive machine won’t compensate for ignorance.

An archaeologist called Fred, dies in a fire and his body is badly burned. The morgue sends for his two best friends, archaeologists Wally and Harry, to identify the body. Harry arrives first, and when the mortician pulls back the sheet, Harry says, “Yup, his face is burnt up bad. You better roll him over.”

The mortician rolls him over, and Harry says, “Nope, that ain’t Fred.”

The mortician thinks this is strange. Then he brings in Wally to identify the body who takes a look at the face and says, “Yup, he’s pretty well burnt up. Roll him over.”

The mortician rolls him over and Wally says, “No, it ain’t Fred.”

The mortician asks, “How can you tell?”

“What? He had two a**holes?!” exclaims the mortician.

“Yup, every time we went to town, folks would say, ‘Here comes Fred with them two a**holes.'”