Since the sun’s rays are unworthy of my adonis-like body and my aches and pains not worth aggravating, I dont’ have much to offer this time around. No exciting photos of finds to wow you with or stories of bravery and valor.  I realize this will ruin your day and I apologize.  You will just have to ‘bite the bullet’ and get your fix on FB or the forums.

The following will not mean much to most of you but I am sharing it for any of the early FMDAC folks who are still around. 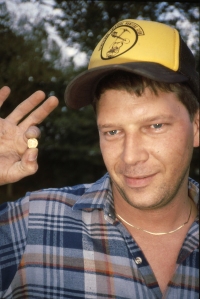 I received an email from Bruce Hazelman, an old friend and part of the original FMDAC cadre, informing me of the passing of Mark Halliday.  Unbeknownst to many, Mark, or “Doc” as he was known, left us in 2013 and Bruce just recently found out via a letter from Mark’s wife Donna.  Mark was one of the first FMDAC supporters and was part of the group that traveled to England for the Longleat Rally and World Championship in 1987.  While there we detected a few Roman sites and Mark came away with a gold stater….the best find of our trip.

Mark was in the Air Force at the time he and Donna met up with us in London and it became his lifework.  He retired as a Master Sergeant in 2006. To Donna and family my belated condolences.

I’m currently reading a book titled Shadow Divers by Robert Kurson.  It’s non-fiction, a real page turner and if you are from New Jersey you will love it even more. Thank you Lisa MacIntyre for sending it to me.

No names offered in order to protect the innocent and flaky…

Came across an old photo of Batman and Robin the other day and had to share it.  ‘Robin’ is an old friend who lives in the UK, but I won’t mention his name because I don’t want to embarrass him.  Keep in mind this was not Halloween or a costume party….just a typical weekend in the West Midlands. Another reminder that one has to be very careful when dealing with British tekkies. A strange group they are….

If you hate pulltabs, and we all do, here’s a gal who’s on the lookout for them.  I met Claudia Zimmer through a friend on Facebook and had to share her passion here.  Her creations are mind boggling.

According to Claudia “this type of craft is very popular in Brazil, where I am from”.

I asked Claudia if she purchased these pulltabs new and she replied “No, they are all used in cans before they get snapped off.  I buy them on eBay.  Some lots are in better shape than others.  I still have to sort, toss the bad ones in the recycling bin, wash and disinfect”.  Need something to do on a rainy day?

If you are interested in learning more check out Claudia’s website here and if you are on Facebook enter “Pop Top Lady” in the upper search area. Thank you Claudia for allowing me to share your story here on Stout Standards.

We tekkies can always hope that this becomes the next great fad…..

MORE ON THE EARHART SEARCH

Amelia Earhart Mystery. Is This the Year It’s Solved?

TEACH A MAN TO DETECT AND…. 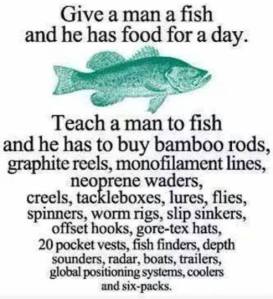 “There is no pleasure worth forgoing just for an extra three years in the geriatric ward”. ~John Mortimer

9 responses to “Another Mixed Bag…”