Before Your Time I Suspect…

Two weeks ago I tried to wake up the three sleeping giants..the FMDAC,  TFMDR and WWATS.   I caused a little stir within the Task Force and Allyson Cohen, Vice-President,  Treasurer and pretty much the glue that holds everything together, responded.  Thank you Allyson .   As for the FMDAC and WWATS?  Nada!  Zilch!  Nothing!  Both groups are apparently missing in action, or inaction to be more precise.  So let me see if I can find another way to poke them and get a response.

WAY BACK IN THE STONE AGE….

When we started the Federation back in the early 80’s we had no intentions of becoming a ‘national’ organization. We were only concerned with forming a small regional coalition of metal detecting clubs.  Our goal?  To try and tackle a few problem areas in the Northeast and to share ideas, programs, events, etc..  We met the 3rd Sunday of every month in Haddon Heights, New Jersey, with delegates traveling from Delaware, Maryland, New York, Pennsylvania, Connecticut and of course New Jersey.

We elected officers, formed committees and everyone involved went the extra mile to make sure the group met it’s goals.  As we continued on our accomplishments were being noticed elsewhere, and we started receiving letters from clubs all across the country, asking how they might join our effort.  We grew quickly and in a little over a year we represented well over a hundred clubs.

How did we accomplish this?  By communicating and let me remind you that back then personal computers were few and far between.  As I remember Archie and Rosalie Ray, our Legislative Chairman and Secretary respectively, had an Apple IIE, as did I.  It ran on a DOS OS and the only thing I was able to use it for was printing out lists on a gigantic dot matrix printer.  As a result I communicated with everyone via US mail (you do know what that is right?).

I suggested we have a newsletter and we decided to call it “The Quest”.  I enjoyed doing it although when I look back now I have no clue why.  I would type the newsletter on my trusty IBM Selectric (loved that typewriter), use trace-on letters for headlines and graphics, then take it to work and print it (I paid my boss $20 per month for the paper and ink used). Then in order to save paper, I would copy and reduce two pages at a time so that they would end up on one 8×10 sheet of paper. The difficult part was copying on the reverse side so that when folded the pages were in order.  Once folded the newsletter wound up being 5½ x 8 inches is size.  When I finished this I took the pages home, collated, stapled and mailed them out to each club (one for every single member). 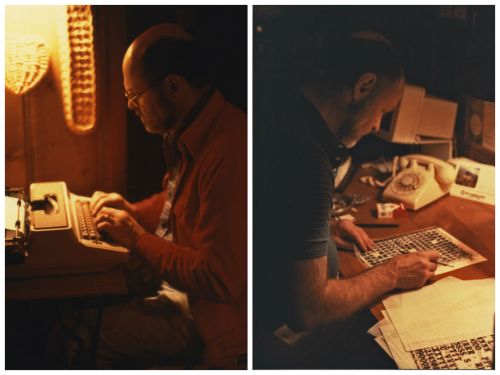 Way back when….preparing a copy of The Quest

Fast forward to today and pretty much everyone has a computer, ipad or smart phone and we have this neat thing called email. We also have blogs and websites, quite a few of which are free and easy to use if one is inclined to put their brain to work.  So why aren’t our national groups communicating?  I have no clue whatsoever. They profess to represent us but consistently keep us in the dark about their efforts. As a result few if any tekkies are inclined to part with their hard earned money when anyone floats the idea of financially supporting ONE national group and hell I can’t blame them.

“Never doubt that a small group of thoughtful, concerned citizens can change the world. Indeed it is the only thing that ever has”. —Margaret Mead

So come on big three….speak up. Get pissed. Call me a troublemaker, rabble-rouser, antagonist, instigator, whatever.  In this case you would be correct. That’s my purpose in writing this and as I said before if you are having problems, no big deal. Every organization has them.  Don’t hide them. Tell your members. They will understand, trust me, and if you don’t have the manpower and need help say so as well. I can’t  guarantee that you will have a zillion people rushing to help but hell give it a shot. Likewise if you are not all that excited about the job, the challenge and the effort needed to make things happen, dissolve your group and ask your members to join forces with one of the other two. There’s just no excuse for not communicating.

If we don’t come together and if we don’t start being proactive, we will soon be out of business and I know for a fact that there are people out there working overtime to make sure it happens. I don’t mean to paint a doomsday picture but the writing is on the wall. Hopefully I have pissed off a few major players in each organization that I get some sort of response.Time will tell.

12 responses to “Before Your Time I Suspect…”