I promised I would respond to Lisa MacIntyre’s recent post….

First I think you all know of my love for archaeologists.  This is the result of years and years of trying to talk to them, understand them, work with them and cooperate with them.  At this point in my life I no longer try.

I came to know Lisa after debating her on the American Digger Magazine’s Relic Roundup show. Labeled the Tekkie vs. Arkie showdown we did two hour long shows that ended with no clear winners.  Didn’t change my mind at all but I came away with a lot of respect for Lisa.  Why?  Because she was a receptive, considerate listener and understood our plight. She did not attempt to belittle or diminish what it is we do, and seemed willing to compromise and work with us….surely not endearing her to her archeological friends or peers.

I was familiar with the Florida artifact case having seen it promoted on a Polish blog a few months ago.  Of course the blogger in question was drooling all over his keyboard because that type of write-up causes people like him to have orgasms.  I thought then and still think now that the methods used to arrest the accused were over-the-top and seemingly unnecessary.  I use the word seemingly because just maybe there were circumstances that led the officials involved to believe that there might be resistance or weapons involved, although I find no mention of that being the case in any of the articles.

I have read and reread the original article that started this firestorm and I must now agree that it was somewhat slanted.  Didn’t change my mind or my feelings but it was pretty obvious.  Not being familiar with the newspaper in question one can assume it’s just another case of biased journalism, which seems to be norm anymore.  Likewise the responses from the archaeological links were what you would expect as well.

I think it’s important for all of us to look at this particular issue and try to see both sides.  Not easy to do I know.. A few excerpts from the article links below…

“This is not the situation of a family out hiking and finding an arrowhead or other artifact that they want to take home”, Brown said. “We did not target the casual collector. These subjects intentionally destroyed lands and rivers for their own personal gain. Some even made their entire living on these illegal sales.”

“The methods used by those charged were extremely damaging to the environment”, officials said. “They were operating on state lands, illegally dredging rivers and digging massive holes in pristine wooded areas.”

Bendus said the laws against illegally grabbing artifacts were strong enough, but that the state needs to get better about working with collectors and archaeologists to make a dent in the practice. “I think we need to come up with some creative solutions beyond the laws,”

I think somewhere there’s a working solution for all this, and it’s probably coming up with a program similar to the UK’s PAS, but I doubt anything like that will happen in my lifetime. One can only hope. Interestingly enough Heritage Harry offered up this  post today.  It’s a joke just like his Artifact Erosion Counter and typical of what obsessed and vindictive people do.  He and his Polish counterpart obviously have way too much time on their hands but that’s understandable when you don’t have any friends.

Anyway I have mixed feeling and emotions about all this.  I am a detectorist and I will always stand with my fellow tekkies and collectors.  On the other hand we are a nation of laws, and we cannot and should not arbitrarily decide which of those we will honor or break.  We don’t have to like them but we must obey them.  The answer I believe is finding a way to change them so that all parties have an equal say, if that’s even possible…

Sarasota Man One of Thirteen Arrested

WHAT TO DO ON A COLD DAY!

Finally spied three more boxes of UMO’s in the garage, and decided to sort through them and see if maybe I overlooked any goodies.  I used to use plastic shoe boxes to store these unknowns and somewhere I still have a few more stashed away.  Where they are is anyone’s guess.

Anyway, sorting through these boxes took a lot more time than I’d anticipated.  I found myself looking at things a little closer, and yep, found a few keepers, as in coins.  Not sure how they wound up there but they did.  When I look at all the miscellaneous items in these boxes I now understand why my back hurts so much! 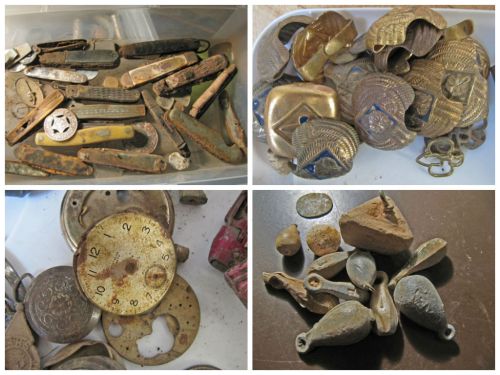 Amongst the trash I found two old large cents, pretty much dateless, as well as a holed silver quarter and a 1926 Philadelphia Sesquicenntenial International Exposition coin or token.  Not worth a great deal but a nice memento that needs a separate place among my keepers. I also found three very dark toned Kennedy half dollars and a 1972 Eisenhower dollar (same condition).  No idea again why they look as they do or how they wound up in these boxes, but then again I cannot remember what I had for breakfast this morning. 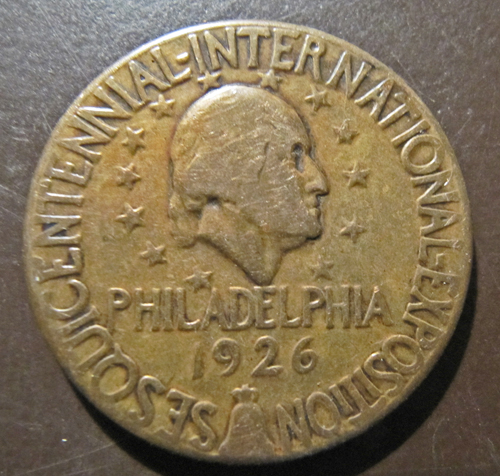 Keys seemed to make up the majority of my UMO’s, along with a few bullets, shell casings, scouting clasps and match box cars. There were also a few pieces of junk or cosmetic jewelry scattered throughout but nothing of significance or of value, and oh, what was left was still UMO’s.

Gotta tell you it was fun looking over all these items and now I have a hankering to find the rest of my UMO’s!

Just got a followup tag from Howland to his most recent post, and you can view it by clicking on the Malamute Saloon link above and scrolling down to today’s date.  Believe it or not he gave a nod to Wally!