A Little Money on the Side…

Now that I am retired I am constantly thinking of ways to bring in a few extra dollars.  Living on Social Security just barely works, and when something extra comes in it’s like Christmas. I’ve thought about writing magazine articles again but the pay is not exactly over whelming, and while I am working on an update to one  of my books, I have no firm commitment that it will be needed or published.

Obviously I could go detecting and hope I find a hoard or vein of gold but the chances of that happening are slim and none!  I thought about robbing a bank, but thanks to my arthritis the teller probably wouldn’t be able to read my note.  Also I am not fleet of foot anymore, and would  probably be shot before I got out the front door, and even if did I would be driving a yellow VW Beetle with “Pug Bug” on the license plate.  Not exactly a great getaway car.

Ultimately I kept coming back to detecting.  Those silver dimes here and there were not going to put me on easy street, and wouldn’t even pay for my time and gas.  Suddenly I remembered a few posts John Winter shared about a UK tekkie named Steve Halward, who cleverly found a way to turn his trash into art. This was certainly a possibility. Take a look… 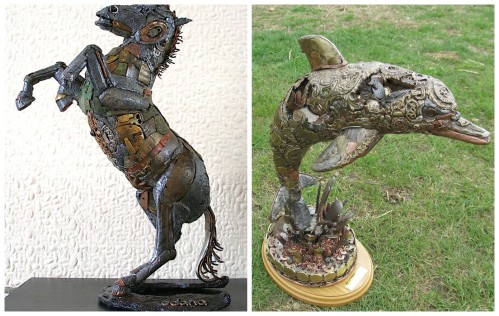 The problem with this of course is that I am not the least bit artistic.  I also don’t have a workplace nor the tools, and if I did I would probably beat the hell out of my hands or burn the house down. So I then began thinking about other items of junk (which I am quite good at finding) and how I might make good use of them…

Obviously the first thing that came to mind was the pulltab.  I flew this idea by John Howland for his opinion, and he laughed it off as bullshit until I shared the following photo, and he suddenly liked the idea and wanted in on the action. This is a possibility for sure. 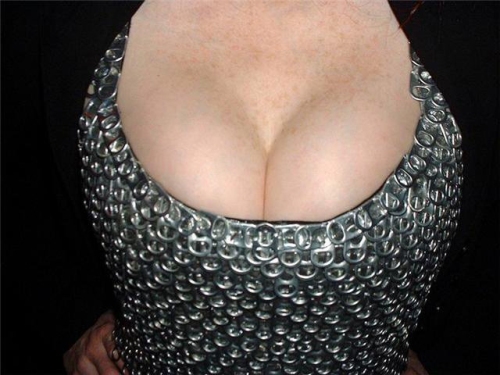 Then my old friend Jessie Thompson recently posted a photo on Facebook and got me thinking about all those old silver spoons sitting out in the garage.   Just maybe I could polish them up, pound the hell out them (along with my hands), and make rings?  And is anybody doing silver spoon nose rings…nope!  Der ya go!  Another project in the folder. 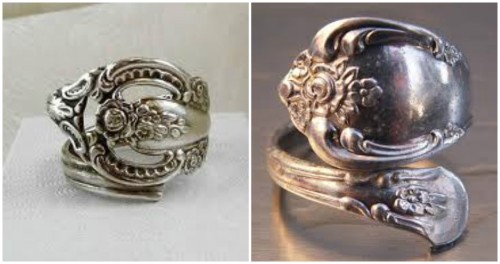 Finally I thought about bottle caps and wondered what I could create with those.  When I mentioned this idea to Fay she told me what to do with them (will pass on this one)…

Anyway I have a couple of potential projects to think about. Given the nature of each I could most definitely corner the market.  Think about it…”Stout Standards Bags, Bras and Nose Rings“!  It might take me a while to collect the tabs, but it would give me time to find my first model.  Likewise I will need to dig out all those tarnished spoons and see if I have any that would look good sticking out of a nose.  I will keep you posted on my progress…

Another Adventure With the Hoard

ONLY A FEW DAYS TILL THE DRAWING…ARE YOU ENTERED?

Just a reminder that the Ken MacIntyre drawing will take place Monday night on the Relic Roundup Show.  It’s not  too late to get entered and possibly win one of the many great prizes being given away, including eight metal detectors. To see the list of prizes and to find out how to enter click HERE.

12 responses to “A Little Money on the Side…”