John Winter made mention recently of Google  Earth and how useful it is, and I wanted to expand on it here some….

I suspect most of you reading this have used this program but if not, do play around with it, and learn some of it’s secrets. The one feature that I’ve  grown to like is the availability of the street view. It not a given for any area, especially remote areas of the country, but in many instances it will  save you valuable time.

I experimented recently with a few sites I used to hunt back in New Jersey, and was amazed at some of the nuances of this program. For instance….a  real hot spot for me back then was an old picnic grove in Kingwood Township, New Jersey. My hunting buddy, Dan Hamilton, became aware of it only by attending  the local historical society’s meeting, and learning that there was indeed an old grove located on, surprise…. Picnic Grove Road. Having lived in the  area for some time neither of us was familiar with the road.

We soon learned that Picnic Grove road was now nothing more than a path, a rutted lane, through the woods between two major roads. After learning the  approximate location, we found it and walked into the woods some before coming to what we considered to be the picnic area. First time we hunted…we didn’t find anything, and left. Our 6000di detectors never indicated anything worth digging (that was the time when many detectorists praised the ID meter).

It wasn’t too long after that initial visit that I felt like we must have missed something, and I insisted we go back again, and give it a second go. When  we did I remember digging the first audio response I received, even though it didn’t register good on my meter. It was an Indian Head cent! Next signal…same  thing. Another Indian Head. At that point I went over to Dan, showed him my finds, and we started digging every signal we heard. The results were staggering.  We came home with a lot of Indian Heads, V nickels, Barber and Liberty Seated dimes and quarters.

Okay, back to Google Earth…. This program actually shows you Picnic Grove road, even though it was an overgrown, forgotten about road, and a mere  opening in the forest. Even the gulley along the main road gave no indication there was a passage way there, and the house indicated at the bottom of  the photo was not there back in the mid 80’s…..

Another terrific hotspot for me back then was a religious retreat just outside New Hope, Pa. It was called Deer Park, and I was always greeted with  open arms when ever I showed up there with my detector. I will also add it was never when there was an event or camp going on. Deer Park still shows on the  map, and apparently is still in operation after 100 years. 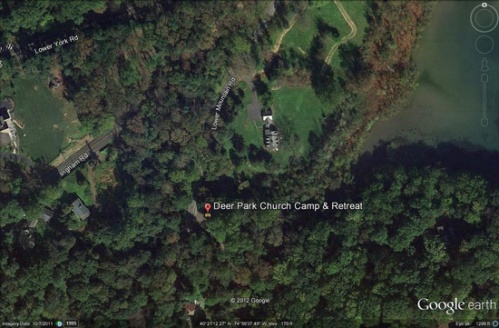 Lastly, the one area that I found more coins in than any other is still in existence, and was recently written up by John Punola in Western and Eastern Treasures.  It’s the open field, the ball field, the soccer field, the park, named Plessey, in Frenchtown, New Jersey. It shows up on Google Earth in both aerial and streetview.  Here again, if you were looking for this field you would be able to see that it is still open, and the street view gives you another view of what to expect.

Maybe I am making too much of this program, but it has saved me time even here in North Texas, by showing me that a particular picnic area (which will not be named) is still a wooded area (thanks to the street view), and one which I will be visiting as soon as the heat and ground conditions allow. If you are not familiar with Google Earth, and all that it offers, be sure to check it out. It’s free, and you will be amazed at all that is available to you….

An aside here….I have given out a few place names here that were very good to me way back when. DO NOT ATTEMPT to detect these sites without asking permission. I am not sure that Picnic Grove road is not now built upon, and Deer Park is a gated area, and you will be need to request permission. My name will mean absolutely nothing given the many years it’s been since I was there. Plessey field is still a town park, and is probably the most accessible. If you decide to detect there be sure to cover your holes, and remember…..I have most of everything lost there in 2×2’s….you lose!

TWO MORE ON THE MEND

Received emails from Richard Ray and Larry Bateham yesterday, and both are doing well. Larry is back to work, but still undergoing chemotherapy once a week. He’s looking forward to detecting again, but has to wait for the cloudy days now. At least until he’s done with the treatment.

Richard Ray is also through with his hyperbaric treatments and the wound has healed nicely. He still has difficulty walking, but knowing Richard he will find a way….

Great news for two very prolific treasure hunters and ambassadors for the pastime….

A Site Just Waiting to be Detected